In The Mood EP Single

Smooth jazz saxophone can set just the right tone for intimacy so the Plunky & Oneness soulful sax version of “In The Mood,” should lead to lots of romance.  This reprise of the Whispers’ hit song is a bit more subtle but just as suggestive as it is crooned by Plunky’s tenor sax and answered by the enticingly sexy vocals of his musical soul mate, Charlayne “Chyp” Green.

With Never Too Late, the new album by Plunky & Oneness, the father-son production team, J. Plunky Branch and J. “Fire” Branch, travel together through space and time.  Together they create a provocative music-sphere of past and future funk and hip-hop jazz.  Fire uses samples of some of his father’s recordings from the 1970’s, 80’s and 90’s, then chops, dices and splices them with hot new beats to create the tracks for Plunky’s lyrics and saxophone.

The Never Too Late album is chockfull of outrageous and contagious love songs and message music.  It is not straight R&B nor straight ahead jazz, and it is certainly not street rap, but using elements of all of the above, the album creates a sonic landscape that spans a wide swath of urban music.  The ambitious 16-song collection includes neo-soul, nu-jazz, and hip-hop songs about fantasy, wisdom and purposeful partying.   With this album Plunky & Oneness prove that eclecticism is no vice and variety can be its own reward.

Funk is grown folks’ music.  Fused with hip-hop, it can be music that delivers the word.  On Never Too Late Plunky plays the role of the OG, the “Original Griot”, using lyrics to drop knowledge and to encourage and inspire.  He is the “Old Guru” who spits, spouts, and speaks on philosophies of love and life, and advocates getting funky with it.  The songs, riding on waves of urban rhythms, live music and deejay effects, convey lessons learned, urging us to “Be About the Future” while feeling our “Tribal Vibe” and acknowledging “We are One.”

Never Too Late, Plunky’s 25th album, is primarily new and original music; however there are two cover songs and a bonus track in the collection.  The album’s first single, John Legend’s “Tonight (Best You Ever Had),” is a saxophone-led go-go instrumental with sexy female vocal hooks.  Frankie Beverly’s classic, “We Are One,” also rendered as a sax and vocals combo, is still a soulful call to unifying love.   The bonus track, “Tableau Noir,” is collaboration with famed French rapper, Akhenaton of the IAM Band. It is a rap song about dark times in the world being like images on a blackboard which can be erased.

The core Oneness group members breathe life into the music on the album.  The sultry and soulful Charlayne “Chyp” Green is featured on vocals throughout.  Young, VA-based musicians, keyboardist, J. L. Harris and guitarist, Jose Pomier, create shimmering, melodic tonal centers within the grooves.  Bassist P. Muzi Branch, Plunky’s brother and long-time collaborator, is still thumping and pumping the bottom of the funk – in sync with Fire’s hip-hop beats and electronic percussion.

Time travel happens when rhythm meets change, when vibrations are altered and re-ordered, when generations are bridged and when memories create new visions.  Never Too Late is all about timeless lessons of love and life and locomotion.  And it’s even more about Plunk funk & the oneness thereof…

Buy this CD at CDBaby

Tonight (Best You Ever Had)

Saxophonist J. Plunky Branch’s latest single release is a neo-jazz adaptation of the John Legend hit song, “Tonight (Best You Ever Had).”  Plunky spices the ballad with some smooth sax, sensual female vocals and well-placed funky go-go beats for a danceable adaptation that is reminiscent of the saxophone-led hit of yester-year, “Mr. Magic.”

Throughout his career Plunky has pushed boundaries and redefined musical genres with his signature jazz, world beat, funk, hip-hop, gospel and African amalgamations.  His experience and versatility keeps him at the top of booking agents’ and presenters’ lists for club engagements, balls and galas and concerts.  The funky grooves and mellow tones of Plunky’s new single, places it squarely within the smooth jazz category, just in time for the summer festival season.

N.A.M.E Brand Records has announced that Plunky will release a series of singles over the next few months, showcasing the legendary artist's depth, eclecticism and broad musical interests.  In the coming weeks, “Tonight” will be followed by more go-go, some funk, some message music and Plunky's unique brand of saxy, smooth jazz; all leading up to his next CD album.  But “Tonight” is gonna be the (Best You Ever Had)… 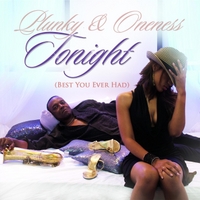 Plunky and his son, Fire, have produced an album of new songs that are both retro and ultramodern by utilizing the lyrical styles and melodies of R&B and jazz in conjunction with the techniques and technology of hip-hop.  The result is a new, organic-techno soul music that is highly danceable and funky.

This album consists of 13 new soulful songs interspersed with several live performance clips, skits and spoken word interludes; so it has the flow of a theatrical production.  All of the studio tracks were created by Fire, and the whole project was co-produced as a father-son collaboration with the group Plunky & Oneness.  So the headline might be Jazz Saxophonist Father and Hip-hop Beat-Making Son Find Common Ground in R&B Music.

DRIVE IT...A NEW URBAN JAZZ CLASSIC Plunky has released 25 albums in his 40-year career. Drive It proves he knows how to shift gears and keep it moving.

Buy this CD at CDBaby

Forever In A Moment CD

Buy this CD at CD Baby

Under The Radar - A survey of Afro-Cuban Music

A Documentary film about Cuban music produced by Plunky

Buy this DVD at Film Baby.com

Saxophonist J. Plunky Branch his legendary group Oneness of Juju perform their innovative blend of jazz, R&B, hip-hop, funk and traditional African music in this concert recorded live at Parisâ€™s New Morning jazz club. A bonus documentary reveals Plunkyâ€™s lifelong commitment to social justice by chronicling his involvement with the 1960â€™s civil rights and anti-war movements. Reviews: - Plunky and Oneness of Juju offer an extra funky live set in this release of a concert originally captured live in November of 2004. A twenty-two song set list including "Space Jungle Luv", "Be About the Future", "Got to Move Something", "World Wide Party", and "Every Way but Loose", ensures that the funk keeps coming as the party gets started, and an additional interview with Plunky himself, as well as a documentary on the man, offers a little something extra for the die-hard fan. ~ Jason Buchanan, All Movie Guide - One of the best recordings we've heard in years from saxophonist Plunky Branch -- and one of the few to really capture the glory of his 70s classics with Oneness Of Juju! Given the billing of this set, it's clear that the older soul jazz spirit of Oneness is very strong in the conception of the set -- and the live performance features many classics from the group's 70s albums on Black Fire, played here with a good live energy and a strong sense of soulâ€¦ - I wasn't familiar with this artist before the purchase. Just saw the name around and heard one song. Heard this was a good package. It's great! The concert part is 1 hour and 40 minutes. Plunky and the Oneness take you on a great musical journey. The band is tight: these are pros! The filming was on point. There is also a bonus documentary, which runs about 30 minutes. Very informative and keeps your attention. If you like Doug Carn, Fertile Ground, Fela Kuti or any uplifting music, then this must be in your collection! â€“ Reviewer Elphonics, USA For further information: N.A.M.E. Brand Records, 2218 Rosewood Avenue, Richmond, VA 23220, 804-355-3586, www.plunkyone.com, Email: plunkyb@aol.com